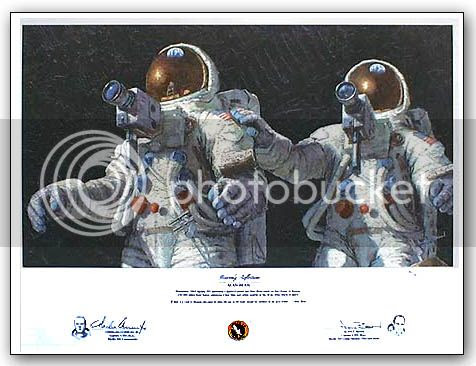 This painting is on the wall in our house. My wife bought it for me for our 10th wedding anniversary. It shows the 3rd and 4th men to walk on the Moon, Pete Conrad on the left, and Alan Bean on the right. It depicts a moment of reflection. The artist wrote, "As I touched Pete's shoulder I thought, can all the people we know, all the people we love, who we've seen on TV or read about in newspapers, all be up there on that tiny blue and white marble? Earth is small but so lovely. It is easily the most beautiful object we could see from the Moon. It was a wondrous moment." So, as you've guessed, the picture was painted by Alan Bean. I recently found out that Alan was coming to the UK for a short lecture tour and that there was to be a dinner in his honour. So, yesterday, I set off for a hotel in Yorkshire, to go and have dinner with a man who walked on the Moon. In the back of the car, carefully packed up, was my painting. Before dinner there was a chance to have your picture taken with Alan. I queued up and, when it was my turn, walked forward, holding up the painting. His 81 year old eyes sparkled and he grinned. "Oh, I love that you brought that. Let me look at it. It's one of my best. I love those spots of sunlight, and it makes me think of my closest friend, Pete." All this in his lovely, Texas drawl. We held the picture between us and smiled for the camera. He shook my hand. "Thank you so much for bringing it." I put the painting back in my room and went down for dinner. Alan talked for 10 minutes before the meal. He was bright and gracious and modest. After dinner we queued again, to get our pictures signed, all 150 of us. When I put mine down in front him he looked up and smiled again. "Hey, that came out great!" he said. I told him I would frame and hang it beside the painting. He nodded and signed the photo. "I so enjoy painting," he said. I told him he was as much a painter as an astronaut. "Thank you, son." We shook hands again. I thought a lot about my Dad, last night. He'd have been 87 by now. He worked on the Blue Streak rocket in 1964. I remember him going to Woomera, Australia for 6 weeks to see the launch. I wished I'd asked him more about it when he was alive. 32 years too late, now. I had a wonderful time, last night. I met some lovely people, including a man who stood on another world. But most of all, I made an old artist very happy to see one of his paintings, and greet it, and it's subject, like an old friend. 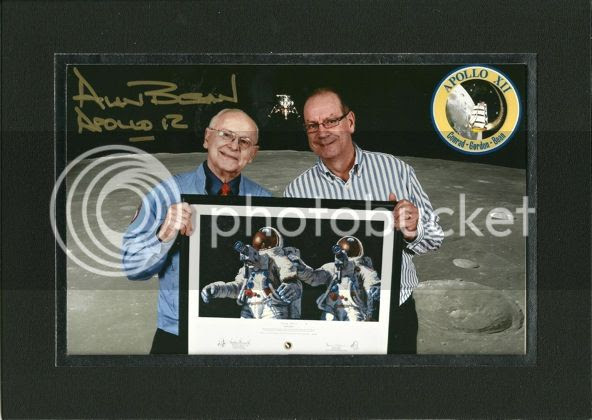 Now I know why this track has been part of my DNA for the last few weeks. Gentle Moon by Sun Kil Moon.

Get your own valid XHTML YouTube embed code
Posted by Niall Brannigan at 08:55 2 comments: