As I write this it is the 25th anniversary of my first Woking game. I know this because the game is famous amongst Woking fans. It was the second round of the 1990/91 FA Cup and the mighty Merthyr Tydfil were coming to Kingfield. When I say ‘mighty’ I mean that they were in the Conference and Woking were a division below. I went to the game on my own, at the last minute. I had a friend who went to games, home and away, but I decided on the morning of the game to go, quietly, on my own. The ground was packed with over 4,000 fans, a huge crowd for Woking, who normally saw just a few hundred hardy souls come through the turnstiles. I stood on the terracing on what I later found out was Moaner’s Corner, a section of the ground that usually contained more mature, embittered, long suffering fans. The terracing was so full that it was difficult to keep your footing sometimes. I found myself a spot just up from the corner flag. The day was cold with a sky so low and leaden that you would swear you’d crack your head on it if you jumped too high. I have watched the highlights of the game just recently and had forgotten two things. I had forgotten what a fantastic noise there was in that tight, slightly tatty little ground. And I had forgotten what a terrific, ball-playing side Woking were. Later, in the golden era when we won the FA Trophy at Wembley 3 seasons out of 4, and Clive Walker was in his pomp, we played some wonderful stuff and were great to watch. I had always had that later side, the Conference team, in my mind’s eye, drooling over Walker’s jinking runs and his wonderful goals. But the highlights from the 8th December 1990 are of a really good side, a team of part timers who had played together for years, and who had a little genius in midfield.

Mark Biggins was from Middlesbrough. I don’t mean the football club, just the town. He was 27 years old in 1990 and had been at Woking for 3 years. His fee from Windsor & Eton had been £2,000. He never played League football, spending all of his career in the lower leagues with clubs like Feltham, Maidenhead United, Harrow and Hampton.And Woking.

Woking fans loved him. Biggo was small, wiry and could turn the big, lumbering defenders in the Isthmian League inside out. I had never seen him before that day but I instantly fell in love with him. How could you not? To be fair, the game turned out to be his crowning glory in a Woking shirt. He had many great games after it, influenced big results, scored a few terrific goals. But, on this day, the 8th December 1990, he was playing a type of football that would have graced White Hart Lane, Old Trafford or Anfield. He was that good.

Merthyr Tydfil were having a poor run in the Conference. Woking had already beaten 3 other Conference sides in the earlier rounds of that season’s FA Cup, so an upset was, as they say, on the cards. Woking full back, Lloyd Wye, scored the first goal, a great header from a cross by his brother, Shane. Biggo scored the second, a scruffy, deflected shot into the corner of the Merthyr goal. Woking went into half-time 2-0 up. Tim Buzaglo, whose father had taught me History at school, got a 3rd goal and, shortly after, was fouled by Merthyr’s Williams, who was sent off. Biggo got the 4th, after another flowing move, before Merthyr got what was surely just a consolation goal. Merthyr had another player sent off, for a terrible foul on Shane Wye, and the game was over as a contest. But it wasn’t over as a spectacle. Biggo’s hat trick came with a shot from 25 yards out, curled around a defender, into the top corner of the Merthyr goal. He just turned away, applauding, as his team mates surrounded him.

With just moments to go in the game, the ball dribbled off the pitch, right in front of me. Woking were 5-1 up and Biggo had 3 of them.Mark Biggins trudged over to take the throw-in, with that distinctive bow legged gait, and bent down to pick up the ball. As he did so, a huge voice from the terrace behind me, boomed out.“Pull your finger out, Biggo. You’ve done fuck all today.”Mark looked up, ball in hand, searching for the owner of the voice. For a second his face was wracked with pain, scowling. But the few hundred adoring fans in front of him were roaring laughing and, a second later, so was Mark. He stood looking at us, just for 2 or 3 seconds, as we applauded, sang, cheered, no, screamed his name, “Biggo, Biggo, Biggo…” He shook his head, as if he couldn’t quite believe what had happened in the past 100 minutes, and turned to take the throw. On the way home, I thought about gigs, playing in the band, girlfriends, even the birth of my daughter. I couldn’t remember being happier.

Here's the highlights of the 2nd half. Biggo's 3rd is just after 6 mins.

Here is Mark, in the worst Woking shirt in the history of the club (We're called the Cards for a reason. Because the shirt has Cardinal Red in it. Not salmon bloody pink!) 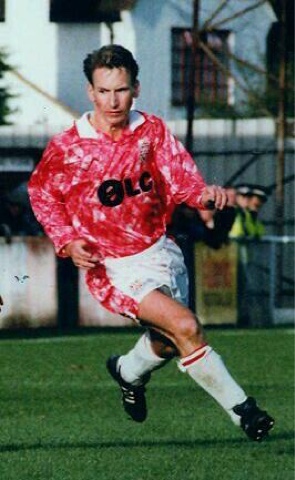 Posted by Niall Brannigan at 08:38