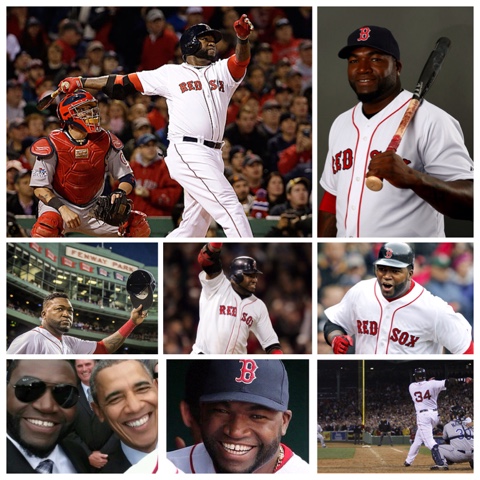 David Ortiz plays baseball.
He plays baseball for the Boston Red Sox, at their historic stadium, Fenway Park, which is 104 years old this year.
David Ortiz is 40 years old. Not an exceptional age, in the long history of the game but, in the modern era, much more of a rarity.
At the end of the 2016 season, either on 2nd October, or a few days or weeks later, if the Red Sox get to the Post Season, the Play Offs, if you will, David Ortiz will retire.
And a small part of me will die.
David Ortiz signed for the Red Sox in January 2003, as a free agent. He had been released from his contract with the Minnesota Twins, at the end of the 2002 season. This decision has been compared since, with the benefit of hindsight, to Decca Records turning down The Beatles. To be fair to the Twins, Ortiz had suffered lots of injuries in his 5 years with them and, when he did play, had been largely ineffective. The Twins let it be known that he was available for trade (baseball players are effectively swapped, rather than sold) but not one team came in for him. So his contract expired and, at the age of 27, David Ortiz could have easily been an ex-baseball player.
The Boston Red Sox now signed him as a free agent, meaning that they didn't have to give up a player to The Twins in return.
And so started a 13 year adventure.
The Boston Red Sox had not won the World Series for 85 years, having won it 5 times in the first 15 years of organised baseball. This became known as The Curse. The Curse Of The Bambino.
The Bambino, Babe Ruth, the most famous player in the history of baseball, played for the Red Sox. He had carried the team to 3 World Series wins by 1918 when, to help fund a Broadway musical, he was traded, for players plus cash, to the Red Sox biggest rivals, the New York Yankees. So began The Curse. By the time Ortiz arrived, it hadn't lifted for 85 years.
The first draft of this story now had lots of facts and figures about David Ortiz's career. However, since the majority of you will not be baseball fans, they will take a lot of explanation. So I will give you just two. David Ortiz is 6ft 3" tall. He weighs between 230 and 250 pounds (16 1/2 to 17 1/2 stone), depending on which season in the last 12 you measure. He is, officially, a Big Unit. So, when he became a father, fans gave him the name by which he has become known, throughout America.
Big Papi.
In 2004, David Ortiz lifted the Boston Red Sox up, placed the club on his back, and carried it, all the way to the World Series. The series before it, the semi-final, they were 3-0 down, in a best of 7 series, against the Yankees. They been crushed in Game 3, in front of their own fans, 19-8. What happened next has gone down in baseball folklore as, inning by inning, game by game, this rag-bag team of misfits, kids and veterans clawed, crawled and crafted their way back.
Did they win? Of course they won!
After that, the World Series itself seemed like destiny. They steamrollered the St Louis Cardinals 4-0. St. Louis did not lead in any game. It was about as one sided as it can get. After 86 years, the 2004 Boston Red Sox had finally lifted The Curse.
So why does David Ortiz move me? Why does this this giant, gentle, bear of a man get me more excited than almost anything else in sport? That's easy. It's because, when the chips are down, when the game is on the line, when lesser players would crumble under the pressure, this slow, loping figure walks to Home Plate, spits on his gloves, claps them together, shuffles his feet in the dirt, points his bat at the Pitcher...and relaxes. I have stood at Fenway Park when this happens. When the crowd are loud, on their feet and yelling. And he delivers. So, so many times, he delivers. When he hits a Home Run, one of those huge ones, into right-field (he's left handed) and it sails over the Red Sox bullpen, into the bleachers....it's the sound. Not the roar of the crowd. No, the split second before that roar, comes the sound of the ball, off his bat. It's a crack, a beautiful, wonderful, CRACK! A sound that echoes back, through the years, back to Ted Williams in the fifties, all the way back to the Babe himself.
On 2nd October 2016, on what could well be the last time Big Papi ever pulls on the Red Sox uniform, my wife and I will be standing at Fenway, once more. I will give thanks that I am there again, in my favourite sporting venue, to witness my beloved Red Sox. I will give thanks that, in the past 13 years, David Ortiz has carried them to not one, not two but three World Series wins. And I will give thanks that I got to witness Big Papi wield a baseball bat, one last time. My voice will roar, my heart will race and my spirit will lift up to the heavens.
And a small part of me will die.
http://youtu.be/HJyxzaLNlNw
Posted by Niall Brannigan at 14:27